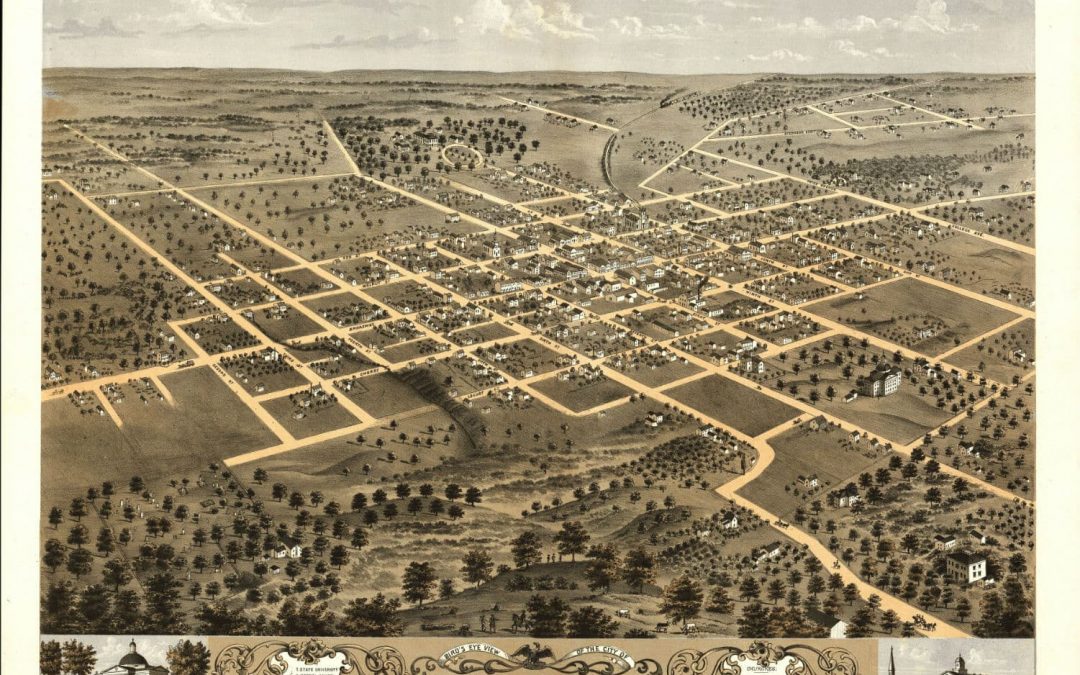 Columbia, Missouri is a surging city with plenty of vision and a rich history that helped turn it into one of the states most prominent figures. Although it’s not the largest city in the state of Missouri, it does have one of the largest college communities and many growing businesses that have helped spark the town’s expansion. We at the Grayson Cottages wanted to take some time to revisit some of the greatest moments in the town’s past that have helped turn it into this up and coming tech savvy gem. Let’s explore some of the rich brief histories behind the Boone County town:

The Columbia area is known to have been home to a large community of Mound Builders. Of course, the area was later claimed by European explorers and was known to be one of the many places that were explored by the Lewis and Clark Expedition.

Very few people know that Columbia was once called Smithton. Smithton never grew to be over 20 people and was recognized for having a bad start. The settlement initially failed because of an unsustainable water system, moved across the Flat Branch Creek, and renamed it to Columbia in hopes of setting themselves on course for a brighter future.

The Beginning of Columbia, Missouri

The great town of Columbia was founded by Kentucky pioneers in 1821, marking the new beginning of this great town. The new settlement was also built near the springs at Flat Branch Creek, ensuring that the town would always have a reliable water supply. That same year (1821), Columbia’s permanence was ensured by being chosen as the county seat and the Boone’s Lick Road was rerouted down what is today known as Broadway. The future of the small town was starting to look promising for the dreaming settlers.

The original Columbia settlers had originally set aside some land for a state university. The first university to be established in Columbia in 1839 and was known as Columbia College, which later became the University of Missouri. It was also known as the first public university west of the Mississippi River. Today, Mizzou is the state’s largest university and serves as a key contributor to the city of Columbia by enrolling over 30,000 students and having alumni over 300,000 in size. The university also offers over 300 different degree programs. It’s more than certain the small investment turned out to pay off more than what was imaginable.

Stephens College was also established back in 1833 but has been an all women’s college ever since. Stephens is faithful to her traditions and eager to embrace whatever the future may bring. It is also the second-oldest all women’s college in the nation as it nears 200 years of excellence.

Today’s Columbia College was founded in 1851 and has been helping students advance their lives through higher education for more than 160 years. The institution was originally founded as a Christian Female College, but changed its name to Columbia College when it transitioned from a two-year women’s college to a four-year coeducational college in 1970.

Here are some of the most recognized buildings and attractions in the city of Columbia:

The Columns is a popular historic symbol of the University of Missouri. The beautiful columns were once on the verge of getting removed from campus after a fire in 1892. However, plenty of students and supporters rallied up in its defense and voted to keep the Columns on campus. Today it is a popular spot for great pictures.

The Boone County History and Culture Center has been preserving and exhibiting plenty of past memorabilia since 1924. The historic figure features historic artifacts and records of the people of Boone County. It is also the only spot in the area that features a history museum and art gallery of its kind.

This historic house was once home to the famous musician, John W. “Blind” Boone. Boone mixed African-American folk music with the European classical tradition to create a fusion that opened the way for ragtime, jazz, boogie-woogie and other genres. The house has been well preserved over the years and is a great spot to enjoy a brief history lesson.

Built in 1928, the Tiger Hotel is a great representation of the early stages of Columbia. Although it has gone through some renovations over the years, it still preserves the same Columbia spirit that helped the city progress. Today, the hotel has some of the latest technologies and outstanding comforts that have once again made it a great place to stay.

The Columbia area was pretty much left alone during the Civil War. It was mostly the nearby towns of Boonville and Centralia that received damage because of certain battles that took place along the way. Although Columbia sided with the Union, these neighboring towns sided with the South during the war, which is part of the reason for modern-day tributes to Confederate Army leaders around town.

The war didn’t end segregation, but it sure sparked a brighter beginning for the African-American community in Columbia. It wasn’t until 1954 that abolition of segregation allowed African-American students to attend regular schools in the area. Slavery had caused plenty of trouble in the area, but the progressing city of Columbia has been able to make a long progression since those days of the past.

It wasn’t until the 20th Century that Columbia started to see major growth in all forms. The 20th Century was one to remember as it brought plenty of growth to the city and opened many doors for the future. The following are some of the key contributors factors to the high success rate in the 1900s:

The city the center point of three institutions in the area, the University of Missouri, Stephens College, and Columbia College, which created a more youthful atmosphere and instigated higher success rates in the county. The two institutions also helped create new jobs and beautiful campuses that allowed graduating high school students to have access to affordable education and more college choices in town. These three colleges also grab the attention of many state locals and out of state students looking for top-notch institutions to earn their diplomas.

Columbia started to see more success when the  U.S. Routes 63 and 40 (Interstate 70), were added to cross through the city limits. The city also added the Columbia Regional Airport in hopes of attracting more people along with plenty of small and well-known businesses that still operate today. Amongst the larger companies established in Columbia are Shelter Insurance and State Farm Insurance. All of these additions to the Columbia transportation system lead to the heavy rise of the population which was just short of 85,000 inhabitants by the end of the century.

In recent years, the dynamic city of Columbia started to make an even larger push towards expansion through technological and business alternatives. There have been plenty of startups and Fortune 500 companies that have established a base in Columbia to find the perfect amount of success they were looking for. The city of Columbia has caused Boone County to become one of the fastest growing counties in the state.

The well-knit community, incentives, and Missouri-certified lands help make the Columbia area attractive for companies looking to relocate. Not to mention the high academic success level we mentioned before. There are plenty of college graduates and business professionals who are excited about the growth of this once small town.